Arwen's Flight to the Ford Hairstyle 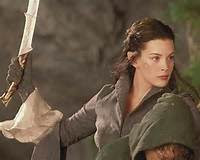 So this post is for my friend Maggie of Blue Eyed Magi. She is really sweet, a fellow Tolkien fanatic, and sixteen today. This one is your birthday present, Faye! Hope you enjoy it. 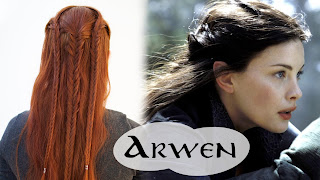 I know I recently posted another Arwen style, but I had to do this one. (I've also done a Galadriel style and a Legolas style.) Plus, Maggie requested it. Even though Arwen isn't at the ford in the book, we both love this style! Though I could seriously get onto Peter Jackson for changing the story. (Nobody messes with my Tolkien!) 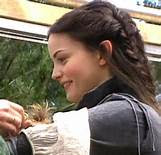 Arwen's Flight to the Ford Hairstyle

1- Brush hair and make a middle part.
2- Pick up the hair on the right side of your part. You should have a small medium size section.
3- Smoothly pull the section towards the back of your head and divide it in two.
4- Take a small piece the right half and cross it over to the left half.
5- Take a small piece from the left half and cross it over to the right half. You are now fishtail braiding.
6- Repeat steps 4&5 until you run out of hair. Be sure to braid tightly, and secure it with a small ponytail holder.
7- Repeat steps 2-6 on the left side of the part. You now have two fishtail braids.
8- Pick up the loose hair between (and maybe under?) the two braids and divide it in half.
9- Repeat steps 4-6 on this section. Secure it with a small ponytail holder.

And that's it. Enjoy the hairstyle. If it seems like it would take too long, just use regular braids instead of fishtail braids. Have fun and don't stress it. Also, what do y'all think is the worst change Mr. Jackson made in the movies?

This is quite possibly the most exciting I've done yet! Seriously, I can feel my pulse speeding up. Why? I'm so very glad you want to know.
As y'all know, I'm working on independently publishing my first book, Inkling Adventures, with help of my friend Morgan. Well.... Today, it is time for the.....

The sign-ups at least. Please, please, PLEASE!!!!!  sign-up if you have a blog. It's really easy. You fill out the form, I send you the needed information, and you post on the set date. If you can't do that, get a friend to or post a link back here on the reveal date. You could even offer to write the post on your friend's blog. (I'll love you forever if you do any of those.)
Which brings me to the the reveal date. I've stressed about this for awhile but finally decided on...

Please do sign-up! Here's a link to the form. So sorry to take y'all off site for it. I couldn't figure out how to post it. :( But that does remind me. I might want to share the Release Date for my book.

And if anything happens and I can't publish then, the back-up date is September 12th. Also, if you choose one of the interview options on the form, please limit yourself to four questions. Please note that if you chose to do a character interview, I'll assign you a character and give you enough info about them for the questions.
at 9:00 AM 3 comments: 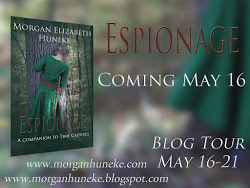 Yes, I know I didn't post last week. I was trying to figure something out, but that doesn't matter right now. This post is about something WAY more exciting than my technology struggles. Morgan published her fourth book yesterday! And I get to be part of her blog tour. Would you believe my sister Katelyn is posting three times this week for the tour!
Espionage is a companion to her Time Captives Trilogy. (I'm still waiting for the last of those books, Morgan!) 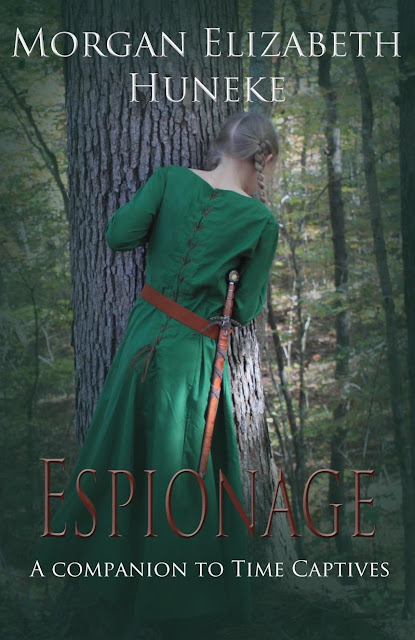 So, Morgan was really sweet and let me interview Sir Roland, an important character. (Do you hear the sarcasm on the word 'sweet', Morgan?)

What is your opinion of strytes?
The strytes are just like other people, except for one thing: They are willing to do what it takes to get what they want, and they're successful at it. The strytes of Calhortz have proven that. They had suffered for so long, having been exiled to Chalton, but they they overcame it. They took the land they wanted, and their standard of living raised dramatically. I think we should all take a lesson from the strytes.

Who do you think would be the best leader for your country?
Myself. Court is fairly evenly divided on issues, but neither side has someone strong enough to lead in a position of leadership. I would do what is takes to make this country great again. I don't have the same qualms that Cumberland has about following his strict code of morality. I'll do whatever it takes.

What is your opinion of Sir Cumberland and his family?
He should take his self-righteous family values attitude out of Court. He thinks he's so much better for bring his daughter along. We're not suppose to have children in court. Does anyone else do it? No. He's always acting like he puts his family first, but I think he does it for show. He's too self-righteous about it for it not to be for show.

Do you hope your son, Kyle, will follow in your footsteps?
Naturally. Why would I be so strict about his education otherwise? He's my heir, he'd better uphold the Roland legacy. I haven't spent enough time with him, though. He despises me, and so he's likely to go the other direction out of rebellion. Children are such trouble.

What are your plans for the future?
To continue fighting in Court. Cumberland wants t give the people more power, and I can't allow that. Commoners can't govern themselves. It's never been done, and they can't possibly have the capacity to do what we do. If they had they way, they'd probably be against the Calhortan Alliance, considering all the prejudice against the strytes. They don't know what's good for  them, but I do. That's why I'm a vassal lord.

Please be awesome readers and check out Morgan's books. Oh! Also, Sir Roland's son, Kyle, was mention in the interview above. Katelyn is doing an interview with him, the lucky girl! Do go and read it.

The past weekend was very busy for my family. We had a homeschool conference, and my choir's concert was Friday night. So by Saturday night, we were all exhausted.
We didn't go to church Sunday morning. Instead, we stayed home and rested. We talked over what we'd learned and enjoyed Second Breakfast (long story). But it was the rest that we enjoyed the most.

Just as the Sabbath is our physical rest, Jesus wants to be our spiritual rest. We need Him to give us rest, or or else our spirits will become weak. But He willingly renews our strength when we rest in Him.

He gives power to the faint,
and to him who has no might he
increases strength.
Even youths shall faint and be weary,
and young men shall fall
exhausted;
but they who wait for the LORD shall
renew their strength;
they shall mount up with wings like
eagles;
they shall run and not be weary;
they shall walk and not faint.
~ Isaiah 40:29-31
at 1:38 PM 1 comment: